During a discussion on the differences between Judaism and Christianity, I was referred to the book Understanding Judaism: The Basics of Deed and Creed, by Benjamin Blech. I enjoyed much about the book and see merit in many of the things he says, both about his own faith and about the interpretation of several difficult Old Testament passages. However, I found his view of Christianity and what Christians teach or believe to be a bit misinformed. He paints all of Christianity with the brush of Catholicism and rebuffs Christianity in general, for things that Protestant Christianity likewise would rebuff. Of course, it would be unfair to judge a person’s views on their faith by what they believe about other faiths. However, I see some problems in his treatment of his own faith. For example, he portrays Judaism as a more united faith than reality supports. There are vast disagreements between the schools of interpretation within Judaism, but Rabbi Blech would have us believe otherwise. Like most books it is good for somethings but not for others. If you are wondering what a portion of Judaism believes and looking for a general overview of Orthodox Judaism then it is a great book. If you are looking for something to lay the Jewish foundations of the Christian faith, then it can be useful only slightly.

Understanding Judaism: The Basics of Deed and Creed 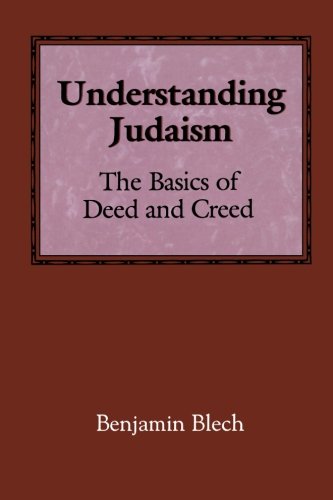 Understanding Judaism: The Basics of Deed and Creed by Benjamin Blech

View all my reviews